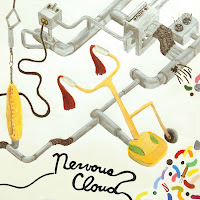 Nervous Cloud is a Chicago-based two piece indie rock band consisting of Travis Lee Wiggins and Sarah Sterling.  Before finding each other, both had been involved in the Chicago circuit circulating through such bands as Essex Chanel, The Salts, and Videotape to name a few.  In 2010 while between projects, the two of them found each other and that's when magic happened. Originally called Friends Having Fun, Sarah and Travis started playing local shows and writing new material, the product of which is their self-titled debut album Nervous Cloud, due out September 9th.  Upon listening to the album (which is streaming here), it seems to me that the main focal point while recording were the lively guitar riffs that find themselves embedded in nearly every song.  More specifically, the combination of guitar and drum is a wonderful thing to behold; both sections are constantly playing off each other, almost like they're competing for attention.  The guitars get loud and edgy, then occasionally die off to the support of the drums, which keep the boat afloat.  The contrast is a lot of fun to listen to, and the catchy melodies make it even better.  As mentioned above, Nervous Cloud isn't out for another month, but they have a lead single "Monarch" available which I've posted for stream below.  To listen to the album, or to download "Monarch", you can head over to their homepage, with more information at their Facebook.

Monarch
Posted by Misha at 1:02 PM