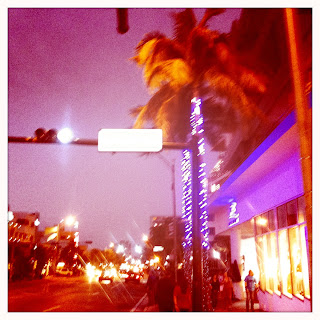 The self-described smooth-fi dream pop group Work Drugs just dropped their new song on me the other day.  The duo has seriously become one of my favorite hidden gems in the music world, as their smooth and laid-back riffs and vocals seem to help me drift away in a haze.  It's winter now, but I can only imagine what this will sound like cruising the streets during the summer.  I am hoping it's something similar to what their artwork tries to convey; walking the warm June streets, sun setting, with good company....and palm trees.  Check out their new single "Rad Racer" below, if you've liked any of their previous stuff then definitely hop on this tune.  They offer it for free download too, so what's not to love?
Rad Racer
I apologize for the lack of posts lately.  Studying abroad has proven to be very busy and I have very little time to update the blog.  I am doing my best, I promise!  In the meantime, hope you guys dig this jam.
Posted by Misha at 12:30 PM No comments:

Chaz Bundick of Toro Y Moi and Les Sins has easily become one of my favorite artists in recent months; and he keeps on impressing me more and more.  My love for his music all started with his 2010 album Causers Of This, and while I enjoyed it thoroughly, I found a majority of the album to be bit too glitchy for my liking...at times a bit messy and overdone.  Moreover, I found it to lack diversity as a whole.  So far from what I've heard of Underneath the Pine, it seems as though his music has advanced immensely.  He has cleaned up his music and refined his style, experimenting with new funk riffs and catchy bass lines that appeal to a larger audience while still managing to establish his distinct Toro Y Moi character.  The new songs aren't overproduced either, instead being remarkably simpler, yet still show a certain deepness and care into each little part of the track.  The result is something smooth and also fetching; a beat you can dance to or chill to.  If he continues on a path of such flexibility in his new album, I am sure the result will be out of this world.  It's definitely up there with my most anticipated releases.  If you haven't heard it yet, I've posted the song "Still Sound" below, which is his first single released from the new Underneath the Pine.  I've also posted a "Still Sound" remix sent to me by Knight Stalker today, which is a quicker and even more upbeat version of the song.  Finally, I've posted "New Beat", his second single from Underneath the Pine, which was released yesterday.  Hope ya'll like the new stuff, and get pumped for February 22nd when his new album drops!!

If you wanna check out more stuff Knight Stalker, you can check out their Bandcamp or MySpace.
Posted by Misha at 6:39 AM No comments: