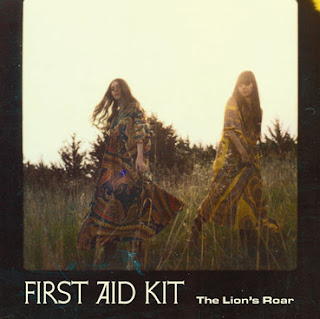 Hello there blogosphere!  It's been a good week or two since I've last written, but I'm officially back from break and hittin' the keyboard again.  To settle back into things, I'd like to introduce to the album The Lion's Roar by First Aid Kit.  The female duo consists of sisters Johanna and Klara Soderberg, and if you live Sweden these names are probably much more familiar to you.  The Lion's Roar marks the second studio LP released by First Aid Kit, and it made a big enough splash overseas to hit #1 on the Swedish music charts, as well as #35 over in the UK. That's not too shabby for a group so young, Johanna is 22 while Klara is still a teenager at 19.  The age may appear insignificant, but it seems to me like a testament to their songwriting prowess and lyrical insight, for their words come across as mature and profound.  This appears to be the case as a stepping stone from their previous materal; The Lion's Roar is a much more developed work overall than their debut LP.  While both are definitely submerged in a folkish concoction, this year's album dives deeper into country tendencies.  With a bigger and fuller sound, as well as further exploration into other genres, First Aid Kit definitely spread their wings and expand their palette here. Check out the title song "The Lion's Roar" as well as another favorite "Blue" below. Enjoy! 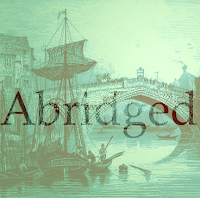 For my last post before departing on my spring break (in which I doubt I'll be able to post anything...but who knows), I present to you music by Abridged, the solo project of Argentinean Bruno Corigliano.  A few days ago, Abridged released his first EP, the self-titled Abridged on SoundCloud.  He was kind enough to send his music my way, including the single "Toys", which I was instantly attracted to.  "Toys" has an amiable simplicity to it, with a mix of pulsating and ethereal synths, the track has an interesting dynamic.  Contained within is a lo-fi, fuzzy electronic sound, and since the song never really aims to jump out at you it's actually quite soothing.  I've posted it below for you to stream, and if you're interested in the whole Abridged EP, you can check out his SoundCloud here, which also includes some free downloads.  Hope you enjoy!  I hope to post over the next few days, but if not...try not to miss me too much.  Peaccceeeee.

Abridged - Toys by Abridged
Posted by Misha at 8:45 PM No comments: 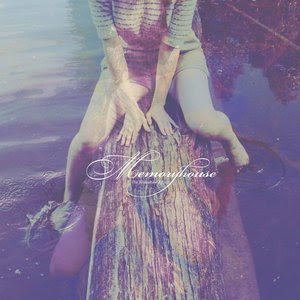 In no way is Memoryhouse a new name, in fact they've been around for quite a while.  In early January of 2010, they released the fantastic EP The Years, which a lot of people forget was one of the first releases to be dubbed as "chillwave".  A lot of people also don't seem to realize that with all of their EPs and singles available on the internet, they have yet to release a full album...that is until this year.  The other day I finally had the chance to listen to The Slideshow Effect, Memoryhouse's debut LP, which came out February 24th.  In some ways it's very similar than The Years, while in other cases it's very different.  To start, The Slideshow Effect maintains a very crucial element to Memoryhouse's personality; songs wrapped in a nostalgic film, intended to bring up memories of the past.  Also, female vocalist Denise Nouvion still uses her voice as a beautiful cradle for the delicate instrumentation. What changes are Memoryhouse's chillwave roots; instead of formulaic airy synths, the focus is more on catchy guitar rifts and soft piano chords that instill a sense of dreaminess.  All in all it's a pretty good release and worthy of at least a listen or two. Check out the songs "The Kids Were Wrong" and "Punctum" below.

The Kids Were Wrong

Punctum
Posted by Misha at 1:21 PM No comments: 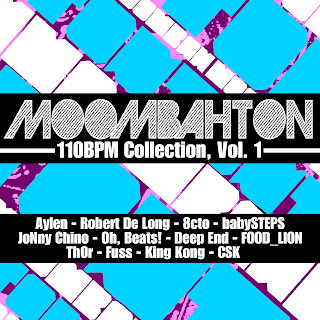 For today's post I figured I'd switch it up a little bit. Now, I rarely write about dance music or anything dubstep, which is due to a mix of two facts; one is that I'm not as knowledgeable on the topic and the other being I'm simply not as enchanted by dubstep-influenced songs like other people are.  That being said, when Aylen sent over his new Distantt remix "Infinity", I was surprised when I felt the need to post. Technically the reworked version falls under the category of moombahton, which is a genre that has recently been growing in popularity.  Moombahton is a form of electronic dance music that borrows aspects of reggaeton and in many cases dubstep, the result of which is pretty unique.  "Infinity" is a near six-minute long banger that flows in and out of many sections, so within this mix there is a little bit here for someone.  And for those not so keen on dubstep, "Infinity" is pretty light on that.  So feel free to check it out below, and you can also go to the SoundCloud for a free download.  Enjoy!

Distantt - Infinity (Aylen Remix) by Aylen
Posted by Misha at 11:39 AM No comments: