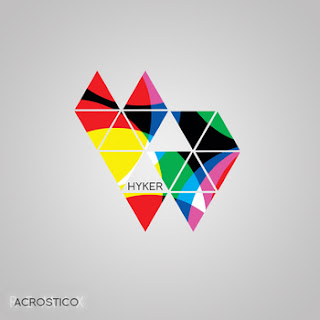 Over a year ago on November 3rd, 2010, I had the luck to interview Sky Hiker, an ambient musician from Brussels, in what was my first interview ever.  As he proved to be such a kind person with a strong enthusiasm for music, I wrote up on him only 3 weeks later about his fantastic newly released single.  His songs were great, and his talent palpable.  Yet as I studied abroad and put the blog on hiatus, I lost the ability to follow him as closely as I once did. Apparently the Sky Hiker project waned as well, until he decided it was time to close it.  But with closure, there starts a new beginning!  After spending 6 months away from his synths, he decided to revamp the project and start anew with a fresh concept he calls Hyker.  The idea is very similar; relaxed, dreamy, instrumental music that aims to recreate "something from beyond", but with differences in the approach.  While he still produces original compositions, Hyker now remixes as well as samples...if you listen carefully you may hear accents from bands such as Radiohead, Aphex Twin, and the Chemical Brothers.  In order to wash out what he calls the simplistic tendencies of Sky Hiker, he hopes to further explore those techniques.  The result is wonderful, Hyker retains the tranquil nature that made him so appealing in the first place, but also mixes in new tactics that allow him to sound fresh.  Have a listen below to see the culmination of his work!  You can also head over to Facebook to keep updated, or Soundcloud to keep an eye on new material.  Enjoy!

In some other news, I've decided to experiment with Twitter.  I don't have a smartphone and have never tweeted before, but I'm excited to take the step up from being a grandpa with technology and see where it leads.  Click below if you're interested in following!