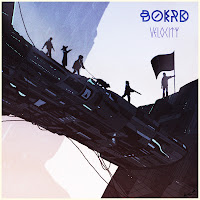 This Thursday I'm going to give you a heavy dose of chill in the form of Boerd, a Swedish producer who hails from Stockholm.  Boerd, otherwise known as Bard Ericson, is also a member of the band Stay Ali, which has been around since 2006. Last year, Ericson created the solo project to further explore his electronic experimentation. The most recent result of this move is his Velocity EP, which was released just over two weeks ago.  When discussing chill, it doesn't get much more laid-back than here.  Ericson puts together slow and spacious beats as well as mellow rhythms that form into a seriously relaxed vibe.  Many of his tracks remind me of Air, that is if Air slowed their tempo by half while smoking a lot of pot.  It's a very interesting listen, and one that's certainly worthwhile.  I've posted "Flimmer" for stream below, with more links available at his SoundCloud, Facebook, and Twitter.

Flimmer by boerd
Posted by Misha at 1:07 PM